After the ‘St Jude’s Day’ storm came the ‘not quite stormy enough to be named’ storm on the following Sunday. Apart from scaring me silly while driving home it didn’t have much of a lasting effect. However, these things must be documented…

Shingle flung several inches on to the promenade

There have been some amazing light conditions over the sea the last week. I don’t have the kit or the skill to do it justice but here is a gallery of shots…

When the snow was here the sea was like lead. I liked the boat out there

Across Pevensey Bay towards Beachy Head. Snow on the South Downs.

Today there was sun, but only about 6 miles out.

Later visibility picked up and you could see the Sovereign Light. Unusual at this time of year.

The sky put on a show.

Up on the roof

What’s happening on the roof of the De La Warr Pavilion? There seems to be a BMX / skateboarding ramp up there. 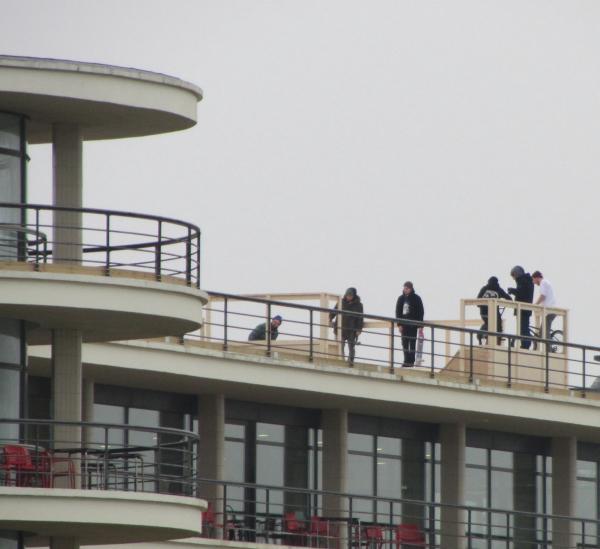 Up on the roof

The roof of the Pavilion can be an entertaining space.

Is the DLWP adding street sports to its mission? Kind of. It looks like it’s going to part of the new Shaun Gladwell exhibition opening on February 2nd. I’m looking forward to it.

We went away for Christmas and New Year (more on this soon). Now we’re back, Winter is here – it even snowed today. It’s still nice to be here though.

A few photos from the seaside…

Ducks? These guys could really fly

Big sky – Beachy Head in the distance beyond Pevensey Bay

A couple of weeks ago we went to watch Eddie Izzard, patron saint of Bexhill, perform on the roof of the DLWP. The whole show was done beneath ‘the bus’ which Mr I sponsored.

The whole gig was in French. I don’t speak French. It was still good. I was very proud of recognising the word ‘Blaireau’ – all those years of following cycling weren’t wasted then.

Some snaps below. Eddie doesn’t feature much as he didn’t go on stage until after dark. He was there the whole time chatting to people but I was too shy to ask for a picture.

Always a good view at sunset

The collonade lights up as the sun goes down

The lights begin to work

They’ve only gone and lit up the bus

We’ve had a couple of impromptu nights out this week.

On Thursday, on a whim, we went to a music gig. Local music shop Music’s Not Dead promoted their first show at the old Bexhill West Station. Part of the station is now an antique shop and café, Eras of Style.

The gig itself was played outdoors on the platform beneath the fantastic iron and glass canopy. The headline act was Jane Bartholomew with support from Dollboy.

The sunset supplied the light show and the seagulls came up with aerial choreography and backing vocals. The idiosyncratic setting was packed with people enjoying themselves.

It’s a great initiative. There’s a second gig on 19th July. Tickets from Music’s Not Dead, Eras of Style cafe and the c-side cafe.

You wait ages for a bus…

We went for a walk into Bexhill this evening. There are strange goings on at the De La Warr Pavilion.

Hang On A Minute Lads, I’ve Got A Great Idea… by Richard Wilson

There seems to be a bus peeping over the top of the building.

We’ve been looking forward to this coming since it was announced earlier in the year. Kudos to artist Richard Wilson, the Pavilion’s team and principal sponsor Eddie Izzard.

They’re just finishing the installation. It ‘opens’ on the 7th July 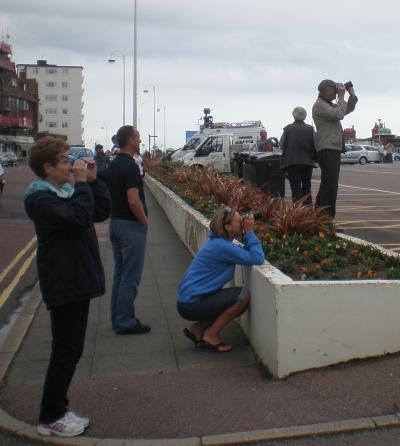 The Olympic Torch is due in town on the 17th July 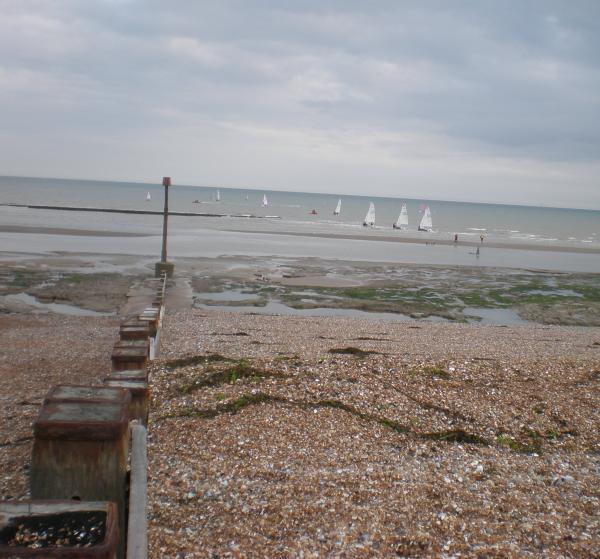 Some things don’t change though

We almost know a song about this

A couple of nights ago we had the first of the Winter storms. A roof was blow off one block of flats in the town. Our tiles stayed on but it was a noisy night. Yesterday I had a walk down to the front to have a look at the aftermath. Here are some of the picture:

Some minor damage to roofing 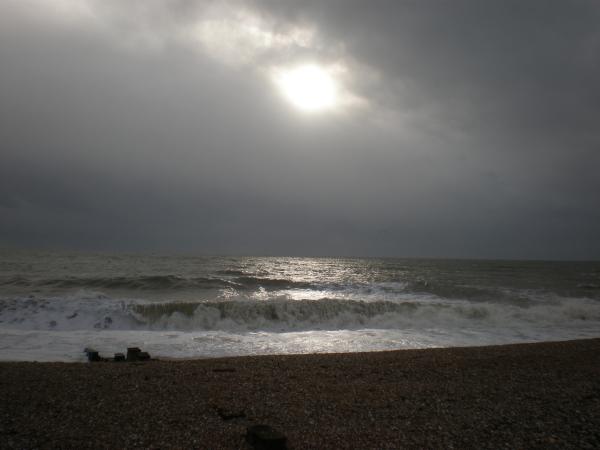 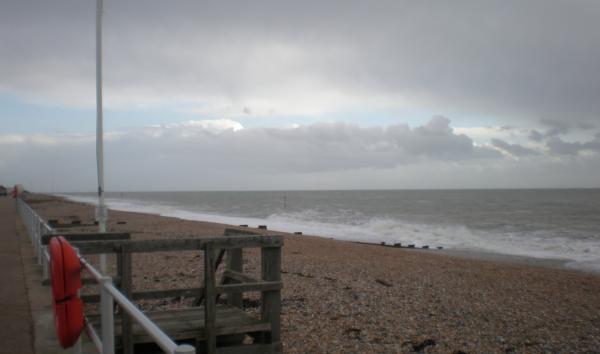 The prom is covered in shingle. The clean up begins.

The beach’s profile is transformed. Thousands of tons of shingle and sand have shifted.

This was a mild storm. I ‘look forward’ to a truly dramatic Winter effort. Reading the forecast, we might not have to wait for long.

The beach was crowded with day trippers 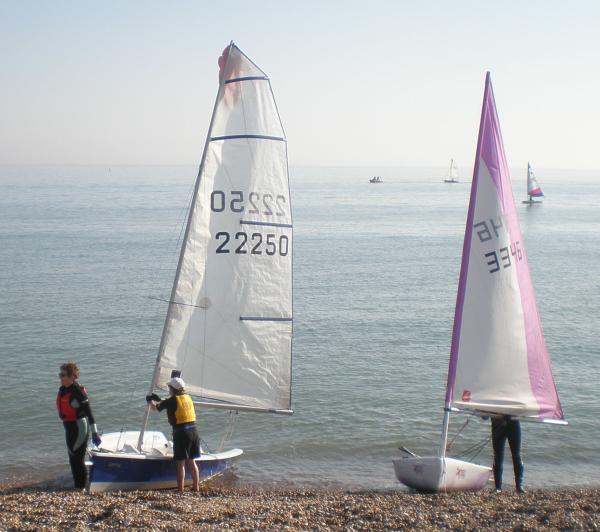 Pat hauls the Laser 2000 from the raging sea

The sea was actually very flat. Some lovely reflections. 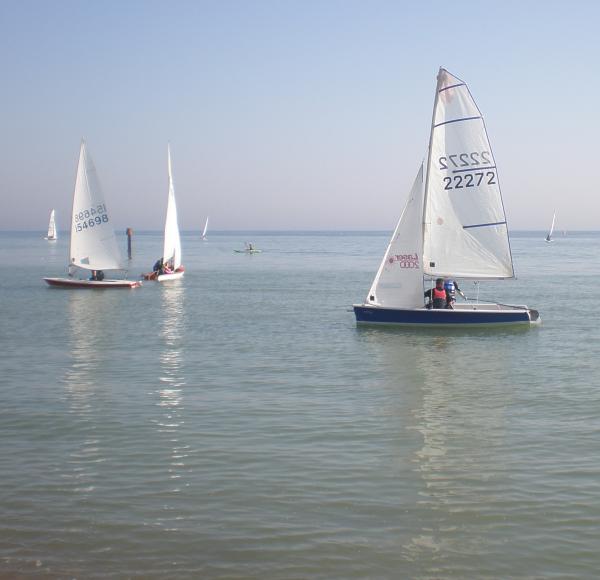 …and the sun glistening off the surface…

Guy in the middle distance

Some nice photos by Tom Davies. I happen to be in them (GITMD) but I like them because of the contexts. Thanks, Tom.

West Parade from the beach at dusk. I'm the silhouette with the MD

Back to the camera giving the baker talk

This was taken at Bodiam Castle’s medieval weekend. That’s me presenting the Baker Talk to a small audience in front of the West Range. I’m afraid that the hat has since been eaten by a dog.