We’re New in Town so we can still play the tourist near to home. Today we headed to Alfriston to see the Clergy House. It’s a small but beautiful medieval building – an example of a Wealden Hall. I am (professionally) very envious of their bread oven and fine collection of baker’s peels. It has nice gardens as well.

The village is lovely, so we stayed for a while. We walked along the river, visited a tea room, bought some bits and pieces at the award-winning Much Ado Bookshop and had lunch at the Ye Olde Smugglers Inne. Most places in South Sussex have a Smugglers Inn – tax evasion having been a popular pastime in these parts for centuries. 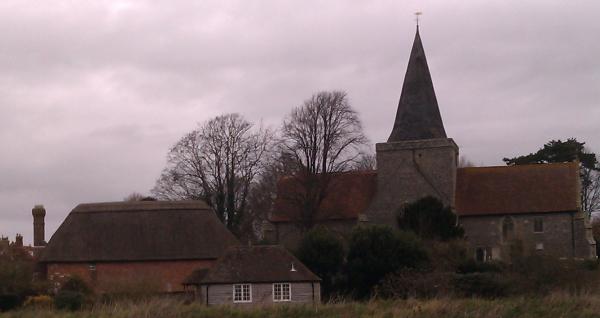 Alfriston Clergy House (L) next to the church. Seen from across the mighty Cuckmere River.

Pat spotted a small, simple model boat she liked in an antique shop’s window. The label was discretely turned over so we went in to check out how much it was. If it was, say, £50 I might have considered buying it as a Christmas present. It was £650. Pat revived me and we headed back to the car.

On the way back we visited Pevensey Castle. It’s odd that we haven’t been there already. It’s 5 miles from home and I’m supposed to know about castles and all that old stuff.

The Roman Fortress, built around 290AD,  is impressive in its scale and completeness. It’s supposed to be the site of the 1066 Norman invasion, but some, controversially, disagree.

There’s a charge to see inside the medieval castle within the fortress, but it’s worth a visit. The keep is mystifying in its construction – with seven different towers in a small area. There’s a small exhibition in the North tower which includes artefacts found on site. Much of the interior would have been timber built, but there are plenty of clues in the curtain wall to how the place worked.

We walked around the outside as well – it’s very intimidating from what would have been the shoreline 900 years ago.

After a brief reinforcement at the time of the Armada (1588), the castle ceased to be militarily significant for hundreds of years. Remarkably it was reinforced and garrisoned in 1940 when there was a real threat of a German invasion. Machine guns posts and pill boxes were built into the Roman and medieval walls, disguised with flint to blend in with the original stonework. Two of the towers were lined with brick and had floors added to serve as barracks for the troops. These twentieth century upgrades have been left in place – part of the site’s long and continuing history.

Posted on December 4, 2011, in Castles, Sussex. Bookmark the permalink. Leave a comment.