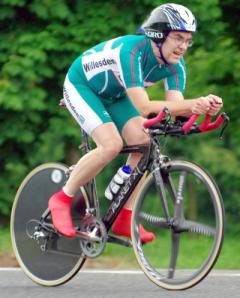 The event was the Finsbury Park CC ’50’ on the Tempsford (F1/50) course – the third time in three years that this event has given me a season’s fastest.

It was an early start as I was dropping the family off at Heathrow on the way to the event. Dawn revealed a still, cool day. I gambled on it getting warmer (short sleeves) but it never really did. There were patches of light drizzle throughout the event.

The only slight panic was caused by a broken shoe, but it seemed to hang together for the duration.

The first few miles revealed that the legs were not in good form. I did an interval session on Tuesday which left me with aching legs for Wednesday. Thursday night’s session at Hillingdon was brutal as well. I’d ridden easily on Friday and had taken yesterday off, but the legs were still a bit wasted. I couldn’t maintain my usual (pathetic) cadence and was slogging a big gear.

Luckily the F1 is pretty flat, so there are no places where a big gear will stall you. I just kept turning the gear over, accelerating slowly where I could and hanging on where I couldn’t.

I took a 500ml bottle of carb drink which I pretty much emptied. I also took four caffeine gels but I couldn’t work out how to open them on the move without slowing down (you can see the ends of two of them poking out of my sleeves in the second photo). At least they had a day out.

The lack of sustenance might explain the struggle I had over the last three miles. The second photo was taken with about two miles to go, and I wasn’t sure that I was going to make it.