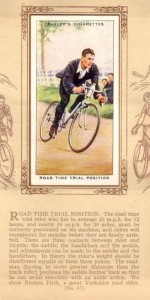 So how did that happen?

The event was the West London CA ’30’ on the Bentley course (H30/8). It was a hot, clammy day with a light headwind from the start and a tailwind on the long section.

My friend Simon had blogged about last week’s ’25’ and had, very kindly, referred to the sort of advice I have been giving him. I hadn’t realised that people listen to me. I should shut up.

I stick by a lot of what I said (though I wouldn’t use the phrase ‘MTFU’ – macho not being my style), but it struck me that a lot of what I’ve said has a negative twist. Simon mentioned…

1) Time trialling hurts. Sometimes it hurts more and sometimes it hurts less, but it always hurts at least a bit. As Greg Lemond famously said: “It does not get easier. You just go faster”. Man up.

2) The perfect day does not exist and neither does the perfect course. You can prepare as much as you like but on the day of the race you might have a sore knee or the wind could be blowing in the wrong direction or there are potholes, or something. There’s always something and you just have to deal with it. Man up.

3) Riding 25 miles in less than an hour is going to take a little longer than I had hoped and I’ll probably have to dig a bit deeper to do it than I had thought. It’ll happen eventually, though.

2) is ever present (it always stops), but the others can be elusive. How do you sustain motivation?
Being part of a club with lots of competitors has helped with 3) (though no club mates rode yesterday). You can redefine 4) – a ‘decent result’ – to some extent by allowing for current form, conditions, quality of field, etc. in your analysis – experience helps here.
Point one – ‘going well’ – is tricky though. For me the ideal is a state of flow as written about by Mihály Csíkszentmihályi. A lot of sports people refer to this state as ‘being in the zone‘.
From Wikipedia:

There are three conditions that are necessary to achieve the flow state.

I felt unusually confident going into yesterday’s race because my ’30’ best was the softest of my current PBs. I’ve only ridden three 30s in my life and my previous fastest (last year) was 1:16:11. I felt that I had the ‘skill’ to beat it, even though my form felt poor. I targeted a long 15 / short 16. I was ‘up’ for the event – nervous and in control at the same time. I had a clear set of goals and had structured the event (travel to the course, pre-race logistics, warm up, race, warm down, recovery, travel home) accordingly. Hold ups on the M25 didn’t phase me because I had built in contingency time for this eventuality.
I prepared well. I ate a big bowl of pasta a few hours before the event. I knew I’d suffered in the heat a couple of weeks ago so I took a lot of fluids with me, warmed up gently and kept drinking. I’ve invested in some carbohydrate / caffeine gels and took one ten minutes before the start.
I only had one event this weekend. I could have entered a ’25’ today but I’m sticking to my reduced racing plan (25 races since 1/12/2009 as compared to 49 this time last year). I’ve done this to aid recovery, but it also helps focus when there’s only one race a weekend.
That’s points 1 and 2 sorted, how about 3? The ride itself.
I started gently – I didn’t want to be gasping in the heat too early. I was moving well on the flat and descents, but struggling a little on some of the rises. I didn’t panic (perhaps because my expectations were conservative). The turn at Chawton revealed that I’d been riding into a slight headwind and I was able to get the big gears rolling on the longest stretch of the course back to Farnham – this was the ten miles in 22:31. So far this flow thing seemed to be working.
And then I went round the top turn (about 18 miles). For a few miles I was swimming. I felt dehydrated, my legs felt weak, my groin was being ripped to shreds, I seemed to hit every bump in the road. This was not flow. But I kind of knew it might happen. What do you do? You dig in. You accept you’re going too slowly, but you change down and turn the gear over. Break the course down into units: past the start point and there’s a descent and better road surface before the tough drag. Use the steep descents to accelerate and recover. Look forward to the tailwind on the last five miles. Keep it moving. Oh, and remember to take a bottle next time – a swig of water might have helped.
I guess that’s where the notes I accidentally gave to Simon come into their own.
The final Holybourne turn felt like a mixed blessing. Only five miles to go, a tailwind and a blistering last two miles. But a couple of hills to drag my sorry butt over. I went as hard as I could and enjoyed (flowed through) the 30mph finish. I hadn’t been checking my time, but a glance at the watch showed 1:12+ – an amazing time given my recent form.
I warmed down and then drank and drank and drank. I’d certainly made an effort – it was an hour before I felt safe to drive. This morning my legs, back and… saddle contact area are a mess. But it was a good ride. It was fun.