>What a strange weekend’s weather. Yesterday was a Prime Coaching session at Welwyn track. We were riding in short sleeves and shorts and worrying about sunburn. Today it’s cold and wet and, hours after my race finished, I’m still struggling to warm up. 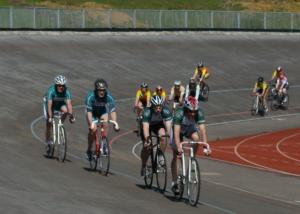 I have no major events this week so I’ve trained harder than recently. I’ve also played a little harder: a meal with friends midweek and a curry and beer with Pat on Friday. This may explain my complete lack of form at the track! There was some hard riding going on, but not by me. Perhaps Cobra beer isn’t a performance enhancing substance after all.

Today, expecting another decent day, I rode an Amersham RCC club 10m TT on the Great Missenden course (HCC180). My target time was 25:59 or better, but I hoped to get close to a 24.

The weather was foul. It was cold and the rain showers kept coming. Visibility was poor.

As the condition were unpromising I decided to ride my training wheels. I wore long fingered gloves and overshoes as well. The overshoes filled up with water at the first puddle I rode through on the ‘warm up’.

The race itself was good. My heart rate took an age to come up, but this was probably to do with a combination of the cold and yesterday’s exertions. I kept the power up and kept an eye on my cadence. I’ve been changing down every time my revs dropped below 80rpm, but at the moment I think I’m more effective at 77/78rpm.

There was a tailwind to the turn which made the descent to the far roundabout good fun. The drag back to the middle roundabout was tough (19mph for 2 miles), but I kept it rolling. I finished with a season and course best of 25:52 for 2nd place out of the seven starters.