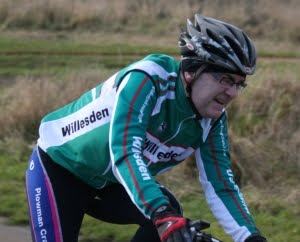 I enjoyed today’s race. Conditions were cool with a headwind blowing down the finish straight.

This week I managed to start in the top ten and stay there for several laps – it makes the pace more even if you can do this. Mid-race I had a few minutes of fighting to close the gaps, but I don’t think I was near to being dropped. Later on I recovered and  finished strongly (by my standards). There were plenty of breaks so the pace was consistently high as they were chased down.

After a fairly incident free race, the last couple of circuits got twitchy with people shouting at each other things like: “hold your line”, “watch where you’re going” and “lend us a fiver till Tuesday”. When this starts to happen you get a feeling something is going to go awry.

At the side of the track some of my team mates had turned up and told me to move up in the last few laps. Ever obedient, I did manage to gain places (though I got stuck mid-field). This effort might have saved my bacon – there was a crash on the last corner. For once I was ahead of it and ‘sprinted’, probably for 25th place or so. ** Update ** I was actually 16th – woo hoo!

I suppose I’m another week fitter, hence the better ride. I also shaved my beard off which saves weight and reduces aerodynamic drag.

The race was won by Matt Sheppard of Worcester St Johns CC in his first race. I was pleased as the St Johns is one of my old clubs.

It was good to have a brief chat with cyclist/blogger/lawyer Martin Porter on the wind down lap. He was much more active in the race than I was though he got caught behind the melee. Next week, perhaps.

Next week is the last event of the Winter Series and possibly my best chance of a win… they’re having a raffle.