>A Man Of No Importance – Union Theatre 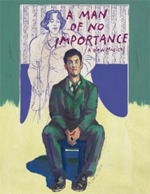 We went to see A Man of No Importance (book by Terrence McNally, lyrics by Lynn Ahrens and music by Stephen Flaherty) at The Union Theatre in Southwark yesterday. It was great fun. A small (80 seat) theatre, a large, talented cast and band and a crisp production.

We went because The West End Whingers enjoyed it and because the lead was Olivier Award winner Paul Clarkson. Paul was one of the three cast members of my play Upside Down and Back to Front all the way back in 2005. To give you some idea of his versatility, the characters he played were: Alan Gresham, Lady Partington, Thomas Evans, William Moore, Gerhardt Heinz, Friday and Grandma Irons. Top man and on top form yesterday.