>Saturday was my first trip to the Calshot velodrome for the Prime Coaching training session (there are more through the Winter). The track is only 142 metres around, so I was worried I’d find it more difficult than the 250 metre Invercargill track that I rode in August. In fact the tighter corners make it much easier to ride high on the banking (more g forces) and it feels a lot safer. The only problem is holding the bike down on the black line as everything is conspiring to push you uphill! I really enjoyed the session. If you’ve never ridden an indoor track before I recommend Calshot and the Prime Coaching team. 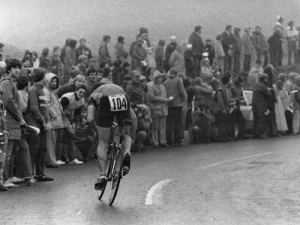 Sunday was less fun. The Autumn hill climb season has a great tradition, so I thought I’d have a go at the West London Combine event up Windsor Hill. It’s only half a mile after all. How painful could it be? To my shame I never got as far as the pain – I rode through the first couple of corners and jacked it in. My heart rate wasn’t high, I just felt totally negative about the whole thing. Not good and symptomatic of a continuing issue.

The event was won by Rory Atkins of the Twickenham CC with a 1:58. Second was Willesden CC‘s own Stuart Birnie. It was nice to ride out to the event with the club. A bit embarrassing riding back though.

The photograph of a British hill climb is by the late, great Bernard Thompson.