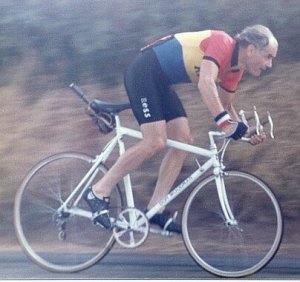 This Ross-on-Wye and District CC event (run as a tribute to my father – left) has been my target for the last few seasons. The first time I rode it I did well (a 1:10 on a road bike), but since then I’ve failed to post a decent ride.

This year I was fit and well, but perhaps a little jaded towards the end of what, for me, has been a hard season. Indeed, this was my last 25m TT before taking a month off. The pressure was on.

The Usk to Monmouth and return course (R25/7) is one of my all time favourites. It’s a quiet, well-surfaced dual carriageway course with a short ski jump start, a tunnel (!) and a few miles through some lanes after half way to spice it up a bit.

The first twisting, downhill mile had recently been gritted, with plenty of loose material being left there. That, combined with the occasional rain, led to many punctures – some before riders had even started. It was definitely a slower start than the last time I rode the course in May (32.2mph top speed as compared to 39.5mph in May). There was a definite tailwind to the turn and, despite heavy legs, I got to half way in just under 29 minutes. I punched it quite hard through the lanes but died when I got back onto the dual carriageway ‘ascent’ to the Raglan junction. I almost pulled it back together for the last 5 miles, but the opportunity to break the hours had gone. Finishing time: 1:00:52.

Most riders were 20-30 seconds faster than the May event but I went back 52 seconds. Despite this I’m pleased with the ride – second fastest of the season and a real fight to bring it home. I’ve one more TT before I call it a day for this part of the season (I may ride again in September and October).

Thanks to the Ross and their friends for running a great event. And congratulation to them for winning the individual event and the team prize!